Skip to content
On 16th August, I desperately posted a plea on Facebook asking for rescue teams to help my granduncle and aunt. We had made calls, messages, reached over to every official we could as a family and posted our requests on www.keralarescue.in. Faith took us through those days as they remained stranded, unreachable and beyond help. On 17th, they were rescued after two nights on the cold terrace. We were so grateful.
It was at 2.30am the next night that I received a call in response to my rescue request. I was moved. Someone somewhere was going through a list of desperate pleas and reaching  out to people like us who had no information about what was happening on the ground in a devastated Kerala.
The next day I connected with another volunteer about another 30 people who had been stuck for four days. They were soon rescued…As I messaged to thank him, he told me about the Kerala Rescue Triage Team.
The overwhelming data was becoming a problem. With their medical experience, Dr. Harikrishnan felt the triaging system would be an efficient way forward for the team. So along with Dr. Nishanth and three friends from The Thrissur Medical College they worked to making it happen. They reached out to Arnav Bansal who had written the algorithm for finding urgent requests and together they discussed how they could make the platform more effective for triaging. Arnav, by the way, is an 18 year old who just cleared his 12th grade!
And soon with the help of Prasad and Ajith the initiative became global. 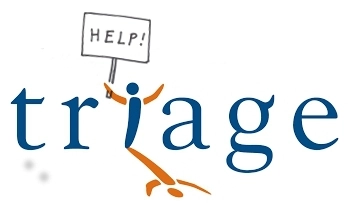 Triage was a new word for me. Merriam-Webster defines it as the the sorting of and allocation of treatment to patients according to a system of priorities designed to maximise the number of survivors.
And that’s what the task was. To call and assess the status of the victims, make contact, assure them and make a criticality assessment. Sure, I can do that, I thought and jumped in!
But how do you assess if people stuck in a house with no food and electricity for three days is urgent, most urgent or critical. What about a grandmother with no food for her six grandchildren? Or the situation of the five people who stayed behind to help one who is bed-ridden and cannot be lifted out easily without a stretcher. Or the three villages surrounded by a river, running out of provisions? How does one respond to the request of information of a young man who floated away?
That’s what the 200 odd people did. People from around the world who had voluntarily come together to listen to heart wrenching stories, battle helplessness and to reach out to friends, family and anyone on the ground to make things happen. Each one trying to calmly move through the volume of data in front of them checking through every detail and patiently responding to queries that were beyond them.
It was not all roses. We irritated a few too. Some, for example, received five calls asking about the status of their request. Unfortunately, the website did not have a provision to close requests. Technology can be a pain but Prasad quickly created a google form to close cases and work around the issue. We couldn’t let time in the way of the problem.
But in the three days that the team worked non-stop round the clock, they closed over 15800 requests and triaged 6000 plus rescue details. Sometimes for a small family, and sometimes for over thousand people. The triage data (http://bit.ly/2PmRWs0) we compiled by reaching out to victims was then made available to Government Officials, Rescue Volunteers & NGOs and the public.
I don’t know if we win the number game, if naysayers will find fault in the process, or if someone will question the impact of our efforts. I can’t even explain the technicalities of it all. That’s for the techies of Kerala. But, it really doesn’t matter, does it?
How does one measure the impact for something like that? How does one explain the emotion of receiving word that people are working for you? Help is on your way? I can’t.
I only know that three days back I was feeling helpless and cut away. Today I am with 235 others on a WhatsApp group and a hundred thousand others across the world who stand together as a community to impact, to rebuild, to rehabilitate, willing to help in any small way that we can.
To all of you at the Kerala Rescue Triage team and the Team at the keralarescue.in, and all the other volunteers and personnel who are working relentlessly, I am grateful!

My Tryst with Triage

by Ann Thomas Time to read: 3 min
Life My Turn Relationships How Can I Help?