Skip to content
Atul Gawande’s Being Mortal is not a difficult text; the language is simple and situations real. The amount of research that seems to have gone into the book is impressive. I even found myself wondering how a practising doctor had managed to juggle roles, travel and interact with the number of people he mentions through the pages. Nevertheless, I kept pushing the book away at every opportunity I got. While I managed to finish Paul Kalanithi’s ‘When breath becomes air’ in a day, I was struggling with Being Mortal. 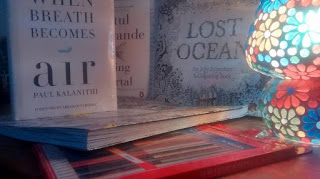 Reason, in Gawande’s words “Discussing a fantasy was easier—less emotional, less explosive, less prone to misunderstanding—than discussing what was happening before my eyes.” Death is not a picturesque idea, not is it an idea easy to confront. With death, there are no discussions, no negotiations, no deals. It is but final. My partner was thirteen when his father died. It was not something they had prepared for; they couldn’t have. Twenty years later he still wishes he had the opportunity for one last conversation, for an apology he could have given his father before he left. But death, as we know, is final.

It isn’t difficult to grow older. It is an automatic process; the one thing that doesn’t take any effort. The year  disappears on you, time flies by and before you realise it’s time for another birthday. But ageing, however, the way you would like to or how you had imagined yourself do it, isn’t as simple. Our body for one never seems to be in coherence with our mind. And then is it really possible to paint a picture of yourself ten years from now. And when you did, does the picture match reality? Maybe it’s not impossible but surely hard. Gawande explains, what we want and what we actually think we want are sometimes so different.

Paul Kalanithi was an example of how life cannot be planned. One day you seem to be at the pinnacle of your life and the very next minute you have fallen into an abyss so deep, you are unsure how to pull yourself out. You do it nevertheless. Paul faced his death with grace. He knew what was important. He let that drive his choices — the ones to fight and the ones to let go. To live one’s life in anticipation of death seems pointless but to acknowledge it and to design around it must need courage.
Gawande pushes us to think about this very idea we dread – People will die. As we brush our fears of the finality of our lives under the carpet, with it is buried our expectations and our hopes for the dignity with which we and the ones we love would like to go. We willingly battle all circumstances for an idea of the kind of life we wish to lead. Why then should we not pen the end of our stories? Why then can we not allow our elders the same discretion? Why do we shy away from gifting ourselves and the ones we love the autonomy they have lived with all their lives and options on how they would want to cope with ‘the constraints of their biology’.
Atul Gawande’s book is an incredible gift to patients and doctors, parents and children, young and old. I only hope that we find the courage to have conversations on what we wish to hold close and what we are willing to give up, difficult as they may seem. Atul Gawande prepares us for when the time comes and Being Mortal reminds us that it will.

What Matters in the End Marriage Thou shalt be saved!
Education Our Fight to Fit In