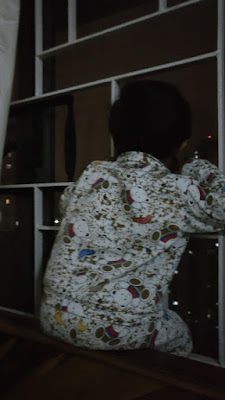 Someday, you won’t be so little
And I won’t be so tired.
This tiny hand won’t fit in my palm
This little body won’t curl into my lap.
Just as your crawl became a walk
And the world became your field
Someday this babble will become words,
And the words incessant chatter.

Maybe then, this face and its magic charm

Will no longer hold you enthralled
The paper you balance on my head,
The hide and the seek
The poke mamma eye not game enough.
Someday my fingers may forget to tickle,
Attacks of a roaring me won’t bring you a laugh
It will be beyond hugs ~ the heartbreak and pain
you may need some victories
won on your own
The sight of me, far from enough.
Someday we’ll no longer be wrapped in each other’s lives
You and I, we’ll have world’s far apart,
even when close, there’ll be secrets to hold
Time will choose to once again become mine.
It seems far away but now I know only well
Time is fleeting and years they fly by.
He too was one, just as you are now,
His tiny fingers wrapped in my palm…
Another nine, and I won’t be his nest
A few years more and you too will fly away.
Someday, you won’t be so little
And I won’t be so tired
Time will choose
to once again become mine.