Skip to content
Yehoshua was seven when his best friend had a baby brother. Not to forget, Kevin and Abigail, his cousin’s had already got their fair share of little ones to bully. Kevin, a little more than his fair share with the twins.
Our man was feeling a little left behind and that’s how the ‘I want a little brother’ record started playing in our home.
My husband too had always wanted a child before he met me but I had managed to bring him over. With Yehoshua, however, it wasn’t as simple.  And though I really didn’t want him growing up without siblings, I wasn’t sure I was ready. It was a difficult decision for me. The “what ifs” hounded me…could I love another? Did I really want the added responsibility of another child? What about Yehoshua and Thomas? Yehoshua’s relationship/stand in his extended family…
We had already moved in to a space where we no longer needed to explain ourselves. Apart from the raised eyebrow when Yehoshua called Thomas by name, we were already conceived as one unit. And did I really want to shake that up? I had questions in my head I was afraid to say aloud.
Luckily for me, I have an aunt who plays out every single deep dark thought you can possibly think off. Twenty minutes on the phone with her telling me all that could go possibly wrong and why it wouldn’t, simply put things into perspective.
Zachary, Yehoshua believes is his gift to the world. His brain child, who would not have existed had he not decided so.
At 15 months, Zachary cannot say as much, but I think he believes it too. 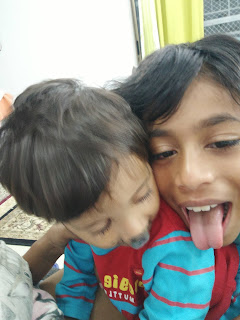 Yehoshua is almost another parent with Zach. He has conversations with Zachary, runs and rolls over to catch Zach if and when he falls, entertains him while I get busy and the worst — even yells at us. Just the other day, I heard him scream, “aren’t you guys supposed to be parenting your child!”
Ofcourse, every now and then we hear an exasperated Yehoshua rant, I wish I never had asked for a brother or what was I thinking?! But in a couple of minutes, the rant is forgotten and Zach has once again become the adorable plaything to hug, kiss and train. Each morning as Zach wakes up, Yehoshua screams, “first smile of the day, for me!” And its true, he usually wins the first smile! And Zach, seems to be growing up in his brother’s shadow, climbing every surface he can scale.
I was watching a show where the characters introduced themselves as half-sisters. My heart skipped a beat as I heard Yehoshua’s voice behind me, “Mummy, what is a half-sister?” I calmly explained and Yehoshua responded, “Oh like Zach and me.” I could only wish I had not let that happen or introduced the thought into his mind. It has been a month, and Yehoshua who usually ensures that he tries a new word almost immediately, has not repeated the word. Not even to show off.
In our home, we forget. We forget that we are different people.
Different people with different experiences tied together only by our love for each other.
And that it is SO EASY to forget — where we have come from, how we came together, the journey — and to only see each other for who we are, is our biggest gift in life. 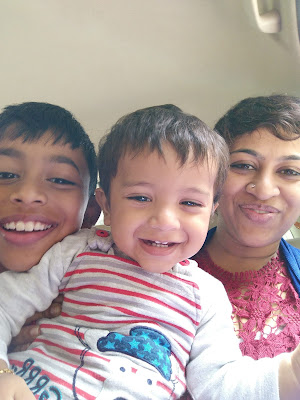 And then, they were two!

by Ann Thomas Time to read: 2 min
Education Split right through
Parenting How to train your dragon…