Skip to content
When exams get done, marks come home.

I have a joke about how my son loves his teachers so much that he leaves them a few marks from each of his papers.
He hates the joke.
I am yet to understand why.
Because it doesn’t matter, does it?
Whether he makes 10, 15, 20 or 25 out of 25.
Really.
What does matter is how much effort he puts in to understanding concepts and how he can connect dots. It excites me more when he is able to translate his classroom concepts into an idea, even a frivolous one, on how he would use a technique he read about to his life.

The exams leave us wondering though… curious about how he has interpreted instructions and dealt with data and structure. As parents it is a great lens to see what really happens outside our home and how well assimilation happens or what is missing.
Like in the image, it is interesting to see that he has decided to answer a two mark question in exactly one sentence.
Is he correct? Yes.
Is the answer complete? Yes.
But is that enough? No.
In this case, understanding that detailing counts is important. But that comes with training. Now we know. 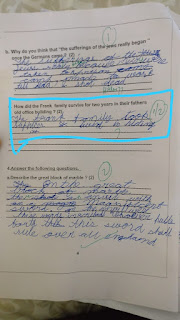 But the number, that really doesn’t bother either of us.
My folks never cared either. I remember them saying, if something had to be done, it was before the exam.

I, however, learnt my lesson the hard way.
I was a ninth grader and responsible for organising a dance with another friend. She was great at designing the moves. I, at the training, and I took my role extremely seriously.
Not a minute of practice was skipped. I may have made the lives of the little kids, mere 5th – 8th graders miserable. I wanted every beat, every move of the hand perfectly coordinated.
And they did great.
However, once it was over, instead of simply appreciating the effort, I was upset with the moves that were not in sync. I was critical.
As I saw their faces fall, I knew I had I erred. I had disappointed them and myself.
Believe you me, it was the best performance of the year and we did win the prize. But it didn’t matter, because I had been critical about something that was beyond their control. There was nothing I could do to fix that moment.
Years later, it continues to be the albatross around my neck.
The ‘I wish I hadn’t’ of my life!

Now I know better. I know the effort counts.
And though results or grades may have consequences, it is beyond us.
So it really doesn’t matter, does it.
The correction, the how to get better, the what is lacking and what needs to be fixed, it will come. The analysis can follow.
LATER.
In due time, under other circumstances.
But for now, this is what it is.
And this is what we take home – honestly and earnestly.

by Ann Thomas Time to read: 2 min
Life As Time Goes By…
Life A Reminder of Life